25 years. A Quarter Century. Su Casa Hispanic Center, a program of Catholic Charities, continues its legacy in serving the most vulnerable new neighbors in Greater Cincinnati. Su Casa began as a ministry led by Fr. Joe Nelson and parishioners from St. Charles Borromeo (“San Carlos”) Church in Carthage in 1997, in response to the arrival of nearly 500 Guatemalans fleeing torture. Su Casa became a program of Catholic Charities Southwestern Ohio in 2005 and has continued to evolve over the decades.

On Friday, September 16, 2022, Su Casa Hispanic Center will hold its Silver Anniversary Awards dinner at TQL Stadium, Cincinnati. The dinner will run from 6:00 – 9:00 pm, with an after party and dancing. Once again, we will recognize community leaders and businesses who advocate and serve vulnerable Hispanic/Latino immigrants. After two years of live-streaming a virtual event, we have every intention of hosting an in-person dinner this year. Of course, we will continue to follow public safety protocols that may continue and make any necessary adjustments.

Click here to reserve your seat or table today! 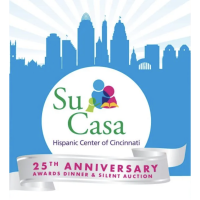