CINCINNATI – For some in the United States, Cinco de Mayo is a chance every spring to sit back and enjoy a margarita and some delicious Mexican food.

But it also presents an opportunity to showcase the history and unique cultures represented by Cincinnati’s small but mighty Latino population.

Cinco de Mayo is a yearly celebration held on May 5, which is what “Cinco de Mayo” means in Spanish.

Alfonso Cornejo, executive director of the Hispanic Chamber of Cincinnati USA, said many think it commemorates Mexican Independence Day, but that’s not correct. It’s actually a remembrance of Mexico's victory over the French Empire at the Battle of Puebla in 1862.

In Mexico, Cinco de Mayo isn’t an official holiday, and it won’t get you a day off work or school. Still, natives celebrate it and kids typically take part in small parades, Cornejo said.

Stateside, Cinco de Mayo started in the western United States, primarily in California, but over the years, other “Mexican rich communities” with considerable numbers of Latino residents helped spread its observance across the nation, Cornejo said.

In Ohio, Latinos are 4.4% of the population, which is actually slightly higher than the metropolitan area of Cincinnati (4.2%). Only about half of them, 2.2%, are of Mexican ancestry.

“Cincinnati doesn’t have a Mexican neighborhood or anything like a Chinatown,” Cornejo said.

Most of the local Hispanic population lives in four main areas – Hamilton, Norwood, Lower Price Hill and Fairfield, which is the fastest-growing population, Cornejo said. 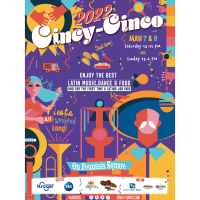