Ohio’s own Judge Marilyn Zayas was recently honored for her community contributions by ABC’s “Good Morning America” program. She was selected for the show’s 2021 Inspiration List: Who's Making Hispanic Latinx History Right Now.

Actor and comedian John Leguizamo nominated Judge Zayas. She was the only Ohioan nominated to the prominent list of 26 individuals.

In his nomination, Leguizamo wrote, “How inspiring that a little girl from Spanish Harlem fought her way to becoming a twice-elected court of appeals judge in Ohio. Refusing to become a statistic, Judge Marilyn Zayas overcame a traumatic childhood, tough, crime-ridden New York City neighborhoods, and numerous educational obstacles.”

Judge Zayas is one of 69 appellate judges in the state of Ohio, the first and only Latinx judge elected to an Ohio Court of Appeals, and the highest-ranking Latinx judge in Ohio and its surrounding states.

Never forgetting her own struggles, Judge Zayas prioritizes mentoring and inspiring youth to dream big and never give up. Through her partnerships with schools and universities, she educates students about the judiciary, shares her personal story, and reassures them that no dream is out of reach, despite their backgrounds. 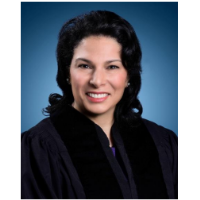